Men’s Mental Health: What Individuals Have Done To Help

In our current world where social media thrives off its consumers and daily  users, as we know, a lot of young people struggle and in particular it is men  that struggle and within silence. In 2018, 6507 suicides were registered in the  UK, where men accounted for three quarters of these deaths. Unfortunately, a lot of men feel like they cannot speak up and openly discuss their problems. A  lot of these causes can revolve around masculinity and that for some men,  being vulnerable and exposed makes them look supposedly ‘weak’. Social media is also a prime part of the issue, where some men may feel they need to  conform to some of the so called ‘ideals’ set out by society to look or dress a  certain way or to be more masculine, amongst multiple other factors. Where a  lot has changed since the past and people can and are more open and freer to  be themselves, there is a still a significant number of men who choose to suffer  in silence thinking they isn’t any form of escape or release. It is not possible to  always know how someone may be feeling, but it is possible to create safe  spaces and open platforms of encouragement for some men who are  struggling and want to overcome these problems without the attention of  people they know.

As an individual and a young male myself, I use social media daily and have  notably come across different pages and group that help support people,  particularly young men. I am an active user on Twitter, and I had previously  seen multiple retweets for an account that is there for young men to chat and  converse with via direct messages. I seen the page and decided to give it a  follow, in support of what they were doing for young males and in case I even  felt like I’d rather talk to someone else other than family members or friends.  The account is setup by ‘two lads who have had mental health issues and now  want to help others’ (@UniAston on Twitter). The two individuals that have set  it up are anonymous, however have made it clear that they are here for people  who want to talk and they’re ‘dm’s are always open’. I retweeted previously  some of their content, to help spread the word for others to use. When we see  individuals that have experienced problems first-hand, we tend to take notice  and may rather speak to them as they know how it feels and are on the better  side of things. When there are people that others can relate to it brings a sense  of comfort and less pressure, as opposed to opening up to maybe friends or  family. However, it is different for everyone and some people may want to and  take comfort in telling family and friends but for some, it isn’t always easy, so this is where these kinds of accounts come in in support of these people. The  account is open to everyone to use but mainly puts the focus on young men. 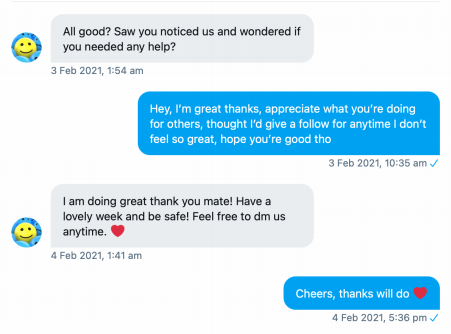 Screenshot of initial conversations between me and the account.

As we can see from this, social media may play a massive part in influencing  people’s mental health and overall thoughts and views. However, there is also  a lot of help that people can receive from these accounts that take matters in  their own hands to help people. Mental Health is an important part of life and  when things take drastic turns, it is always great and essential to have people  there to support you, in real life or whether it is an account like this online. It is  nice to see others genuinely taking the time to allow people to talk to them  and open up when it always isn’t possible. When they messaged me at first, it  was just because I gave them a follow and then on their own accord, they then  asked and ignited the important question of ‘if you are okay’ and ‘if you  needed any help’. These are the kinds of questions we need to ask people  about and notice the signs when an individual may be acting different. I’d  recommend giving the account a follow and as a reminder, there is always help  out there for everyone.